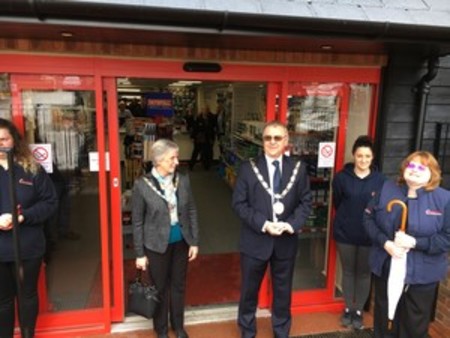 NBG Partner Chandler Material Supplies has capped off a highly successful six months with the opening of a brand-new shop and counter area at its Chelmsford depot. Coming hard on the heels of winning three major awards at the BMN Awards for Excellence, including the prestigious Independent Builders Merchant of the Year, the new store marks a period of growth, new initiatives and success for the family-owned Essex business.

The new store was opened by the mayor of Chelmsford at a successful supplier day. Its self-selection layout offers Chandler customers a chance to browse and buy a range of the building industry’s biggest brands in bright, professional, welcoming surroundings. The new space opens up straight from the yard and is manned by dedicated teams covering two specialist counters: Building Products, and Plumbing and Heating, with increased counter space and direct access to a wide fixings and ironmongery range, and paint mixing facilities.

Chandler is a third-generation family owned business operating out of a 3-acre site in Widford, Chelmsford. It was started by current MD Julie Chandler’s grandfather – an established builder - in the 1950’s. He acquired a plot to store his materials on and in 1953 began to sell these to other builders as well as building houses. In the 1970’s his sons joined the business, and in the 1980’s and 90’s members of the 3rd generation joined, at which point the firm stopped building houses to focus solely on its merchanting customers. Today Chandler provides building, decorating, plumbing and bathroom supplies to the trade and general public.

Chandler has been a member of NBG since 2011 and in that time the business has grown considerably with new warehousing, increased storage, and improved IT. This culminated in the business winning three awards at the BMN Excellence awards: Website and Digital Initiative of the Year Award, Trainee of the Year for Lauren Penney, and overall Independent Builders Merchant of the Year for businesses with 1-10 branches.

Reas about Chandlers and NBG in the press: BMN