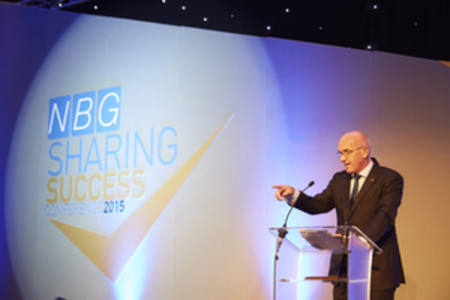 We talk to NBG Non-Executive Chairman David Szymanski about NBG, a life spent in building products and his other involvement in an ancient organisation.

David Szymanski has been involved in brickmaking since the day of his birth with both my parents and many close relatives working for the London Brick Company and living in the village of Stewartby, which was actually owned by the company. At the end of his street was a brickworks that employed 2000 people and featured 31 belching chimneys. Stewartby was the largest brick plant in the world, with a record weekly production of 18 million bricks. Bricks also supported his education as LBC sponsored him to University to read Mechanical Engineering before he joined the business full time in 1976.

David enjoyed a long and distinguished career in the industry. “I was very fortunate to have a number of engineering and managerial roles, including overseas postings in both Iran and Swaziland,” he says “I was appointed MD of Hanson Brick and then Hanson Building Products before retiring in 2009.” Since then David has maintained contact with the industry through ex colleagues, customers and competitors who have all become good friends.

“Bricks and brickmaking gets into your blood and you cannot shake it off!” he says “We all see our products every single day displayed in all types of buildings. We all love to identify the brick types! It’s a real passion!”

There are many organisations linked to the industry, most of which David has been involved with at some time and in 2004 he was introduced to a new organization “I had absolutely no knowledge of The Worshipful Company of Tylers and Bricklayers, a City of London Livery Company, before I was introduced to the Company by Con Lenan, a past Director of the BDA, and I decided to apply to join.”

The protocol for joining is interesting. Individuals are initially elected as a Freeman of the Company which then makes them eligible to become a Freeman of the City of London. “As well as a wonderful installation ceremony in Guildhall, privileges include the opportunity to herd one’s sheep across London Bridge!” comments David. With the Freedom of the City, prospective members are then able to return to the Company and be installed as a Liveryman of the Company. In 2011 David was invited to join the Court of Assistants, the body that is responsible for the running of the Company.

In October 2016, David was elected and installed as Master of the Company for a one year period, following a 600 year line of Masters. “Quite daunting,” he says. “But an honour and a privilege.”

Livery Companies have existed in the City of London, initially as Guilds, for over 800 years. Individual companies were responsible for the control of their various trades within the City and were given a charter by the monarchy. In modern terms the ancient trades were quite diverse, such as Mercers, Drapers, Fishmongers, Cutlers, Skinners, to name but a few. Many of these trades have ceased to exist, whilst many still flourish. There are 110 Livery Companies in the City, and they are still being formed today as modern companies.

The Tylers and Bricklayers are number 37 in the Order of Precedence and are considered to be an ancient company. The Order of Precedence was established by the Court of Alderman in 1515/16 when there were just 48 City of London Livery Companies. “We received our charter from Queen Elizabeth 1st in 1568. We continue to have firm links with our three crafts of roof tiling, floor tiling and bricklaying,” says David.

The Company has 200 Liverymen, Freemen and Honorary members in total. The membership is split roughly three ways in links to the three Crafts, those that are linked to the City, and those that are friends and relatives. This includes a number of bricklayers and tilers, and indeed a few brickmakers. Brick and tile makers have been involved in the Company for hundreds of years.

The Livery Companies have an incredible history and to this day remain relevant, whilst upholding the traditions and formalities of the City of London.

David’s experiences and knowledge as a supplier have proved invaluable to NBG (National Buying Group LLP) as he helps guide the organisation which comprises 80 separate merchants and entrepreneurs. “Over the years I have worked closely with merchants large and small across the country as a key supplier. This perspective has given me valuable insight into how merchants can work effectively and profitably in a competitive arena,” he says. “It means that I can offer merchants a business point of view to ensure that they get can optimise the benefits of NBG membership.