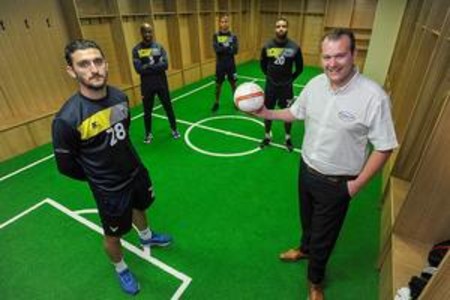 Oxford United Football Club’s home team changing room has been transformed into a mini pitch, thanks to NBG Partner AWBS and supplier ArtificialGrass.com. Designed to boost team morale on match days, the mini pitch of inlaid grass flooring has created a ‘virtual setting’ for the changing room – thought to be the first of its kind in the English Football League.

The mini-pitch project was part of an investment into general refurbishments around Oxford United’s Kassam Stadium. And, as Business Development Manager, Peter Rhodes-Brown says, it’s already had a positive effect on the team: “Our players really like the new surface. It not only brightens up the changing room area but it’s ideal for developing tactics and set-pieces, as well as rethinking moves at half time.”

AWBS is a leading supplier of fake turf in Oxford, and, with MD, Adrian White a lifelong supporter of Oxford United, AWBS – who have branches in Swindon, Yarnton and Oxford – were the obvious choice to get involved with this innovative project.

“It’s fair to say that it’s a prestigious job for me and for AWBS given our strong local roots, and Oxford United are very pleased with the outcome,” says Adrian White. “Artificial grass has proved to be increasingly popular during the last 12 months, our turnover has increased by 150% and we expect this trend to continue as more people discover its benefits.”