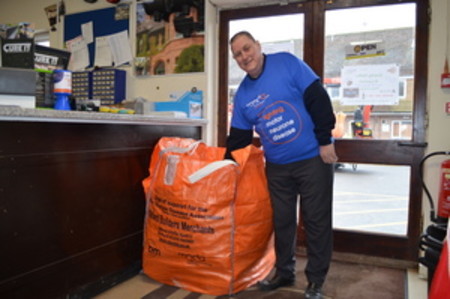 Otford Builders Merchant has launched its 2017 charity campaign with open days at its Otford and Ashford outlets. This year the building supplies specialist, which features in Kent’s MegaGrowth 50 of fastest growing companies in Kent for 2016, will be supporting the Motor Neurone Disease (MND) Association.

The MND Association is a cause close to the company’s heart since one of its founders, Glenis Sparrow suffered from the disease. The company will be fundraising throughout the year with promotions including specially branded bulk bags, each of which will attract a donation to the Association. Special launch days at Otford’s two branches on 25 January (Otford) and 26 January (Ashford) got the fundraising off to a great start with competitions and promotions to kick-start the campaign. Around £7000 has already been raised.

The MND Association works to advance research into and raise awareness of motor neurone disease. It strives to ensure that people with MND, their carers and families can access the care, support and information they need, when and where they need it, reflecting their diverse needs.

Otford Builders Merchant has been trading in Kent since 1972 and remains a family-owned and -run business. One of the largest independent builders merchants in the South of England, it supplies branded and high-quality products such as bricks and blocks, landscaping, timber, plumbing, hardware and decorating materials to the trade and DIY customers. The company made the prestigious Kent MegaGrowth list for 2016 displaying impressive growth figures of 61.7% last year.